The Wally and Osborne comic… not above using potty humor. 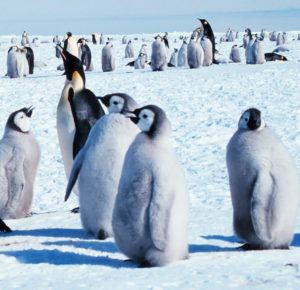 Little punk penguin juveniles, such cute and opportunistic little puffballs. I had been looking forward to featuring some in the comic. They will have more appearances in the future. I really get a kick out of little penguins, they are just these puffballs with tiny heads up on top. I imagine them being little punks too for some reason. Just looking for trouble.

Judging by the white spot around the eye, the juvies in the comic are Emperor Penguins. All the penguins that have appeared in the comic so far have been Adelie penguins. Adelies are probably the most "generically penguin" penguins. Actually their beaks are a spotty black and orange but that wouldn’t have translated as clear in the comic so they get bright orange beaks. It’s the Gentoo penguins that actually have a bright orange beak, they also have a white patch on their head from eye to eye. The other two penguin species on Antarctica are the Chinstraps and of course the large Emperor (who’s young are probably the funniest looking since they are so huge with tiny little heads). These other guys will show up in future comics too. Also, I will eventually be putting together a page about the creatures of Antarctica, kind of a cast of the characters that are showing up in the comic that will also be fun and informative. Yeah, I’m going to sneak some edutainment on you.